Blog
You are here: Home / Blog / Featured / Flashback to an Adolescent’s Dream: A Personal Reflection 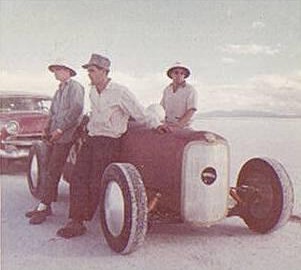 As the push car starts accelerating, the bucket seat into which I had just strapped myself starts bumping my tail bone. My heart is up in my throat as a hundred thoughts race through my mind. The wind starts swirling around my faceshield and into the crash helmet atop my head. I can hear the sound of the tires crunching along on the surface of crusty salt.

I am actually here at the famous Bonneville Salt Flats, about to take my homebuilt car through the speed traps seeking a record for my class! I have dreamt of this moment since I was barely fifteen, looking through hot rod magazines, imagining what it might be like here on this sea of salt – part of the Great Salt Lake in the state of Utah. 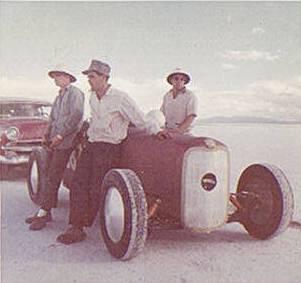 As my speed increases to about sixty, I reach under the custom-made tarpaulin covering the cockpit of my Chevy-powered roadster – tightly fitting black vinyl snapped all around the edges of the opening except for a small hole over the seat where my head is exposed. I switch on the magneto and hear the engine fire. What a relief! It started!

It takes a few seconds for the engine to start running smoothly. Once it does I start applying throttle and quickly pull away from the push car – my own red Ford convertible which we drove up from San Francisco, towing the race car on a trailer. The timing traps are still over a mile and a half down course. The unmuffled sound of the engine, running eight straight exhaust pipes, one for each cylinder, is music to my ears after all the work I had done over the past year.

As my speed picks up, I focus on keeping the car in the center of the course – as straight as you can see for miles before mountains rise from the horizon. While my eyes remain intently focused, my mind continues to race. I wonder about the strength of all the welds I’d made in the frame, the roll bar and all the modifications to the suspension. After all, I had learned to weld building this car! Will my welds hold I wonder. Would my idea about eliminating any springs or shock absorbers from the rear-end assembly work out. It seems that with the salt as smooth as it is valuable pounds of weight were saved by mounting the race car’s frame directly to the rear axle. However, I’ve never seen it done before. What if the frame was too rigid and the welds fractured. I’d be doing end-for-end flips down the course with only a half inch of foam rubber between my butt and the metal seat below me.

What if? What if? All these thoughts are racing through my mind as the car and I hurdle down the racecourse. The tachometer is nearing the mark which I am hoping to reach as the engine peaks going through the timing lights. Providing there is no slippage between the rear tires and the damp salt surface, the setting on my tach will translate to a new record for my class.

The car starts vibrating – not like tires out of balance but more like a shuddering – a sort of kundalini – releasing all of its energy and giving its all. The car isn’t drifting at all, running straight and narrow with little need for any steering adjustments on my part. I wonder if I drop my head under the tarp it might reduce the wind drag another fraction and possibly add a bit to my recorded speed. The tach reading is so close!

As the first timing clock appears off in the distance, I know I am about to enter the timed portion of the course. I drop my head under the tarp, scrunching my body down as far as all the safety belts will allow. I’m not looking at where I am going now, trusting the car will stay on course. My mind scolds me: This is nuts at this speed! As the car screams down the track I sense it wiggling its back end but it seems to be staying mostly on course. I am now a passenger on a missile, literally relying on the seat of my pants to tell me whether the car might be veering off course or not. After about ten seconds at this speed I figure I’d have traversed the time trap and stick my head back above the tarp. The wind jolts my helmet as I raise my head. I am pleased and relieved to see that my butt had not let me down. The car is still in the very center of the track and the second timing light just passes my periphery vision. The run is over.

The adrenaline is rushing through my veins like water through a fire hose! The perspiration is running down my back inside my shirt as I start slowing. When my speed diminishes to about 50mph, I slip the gearbox into neutral and begin coasting to a stop, prepared to wait for my crew to show up. I reach down and switch off the magneto and the engine dies. As the car comes to a complete stop, the intensity of the silence is overwhelming. No other living being is within eyesight. No cars are visible. No people can be seen.

The silence is beautiful and the serenity at that moment surreal, especially after such a noisy, intense and pulsating experience! In the moments that follow as I sit there waiting for my crew, it is as if I am sitting on another planet, all by myself, alone with God.

I was just over twenty years old at the time. I had built this homemade race car on a college student’s budget, mostly from savings I’d accumulated by working in the breweries during the summer months after graduating from high school. It was a shoestring budget by all means, which presented a certain handicap given the cost of building a competitive race car. I didn’t have the funds to have as large an engine as I was allowed in my class. However, despite this disadvantage, my speed was a mere 1/2 mph below the record for my class!

I was very pleased and went home with such a feeling of accomplishment. I didn’t break the record but I played. I was in the game! And I came close. I participated in this unique annual event and showed pretty well, even for a college kid on a shoestring budget. After years of seeing pictures of Speed Week at Bonneville, I could now say I was there. I had been one of those special people who found great joy in building a car for a once-a-year trial, towing it for hundreds of miles to wait in line while hundreds of other racers waited for their chance to go down in history and, finally, going just as fast as we could – all the time knowing there is no prize money. It either appeals to you or it doesn’t. At the time they called it “salt fever.”

Why am I telling this story from over fifty years ago? What has this story to do with anything I’m doing now, like The Great Growing Up?

The Bonneville experience of my youth was one of my earliest experiences of achieving something for which I had longed for several years. No one I knew had the urge to do this but I had salt fever before I could even drive legally. Since that time there have been several itches in my life and I feel privileged to have been able to scratch them, at least those within my resources.

And now, I cannot imagine doing anything but what I am doing, following my calling as it were, as an advocate of large scale social transformation. There still remains the challenge to do what I do more effectively, to broaden the positive impact I have and deepen people’s experience of human potentiality. There’s always more to grow into, to be a better writer, to be more effective as a public speaker, to write books that sell better, to get my articles published in periodicals with greater readership.

But I wouldn’t change what I’m doing for anything…just improve the how. My calling has me and this time the task is not as simple as a young man achieving an adolescent dream. The task is global and it involves many of us, acting together. It isn’t about breaking records but it is about being in the game and reaching new heights as a species. It is also about risk, learning, trust, reliance on others and following the dream.

Beyond the singularity of the rewards for me and my crew back in the 1950s, now the beneficiaries of the dream could be humankind. Rather than the individualism of achievement there is the community of kindred souls pulling together for a collective achievement – a transformed global society. And that has real meaning for this former adolescent.