Blog
You are here: Home / Blog / Featured / Little Did I Know: Now Trump is Revisiting the Same Philosophy

When I was in the real estate securities business I was pretty full of myself. The company I had co-founded was making double digit returns on investors’ capital and we actually thought we were pretty clever, that we had something to do with getting our investors such high returns. Never mind that double-digit inflation was happening, there was plenty of money to borrow making leveraged acquisitions quite easy and that income property was appreciating rapidly.

After leaving my company in the mid-1980s I did some consulting and contract work that included doing some programs for financial planners and tax advisors, preaching the gospel of investing in real estate-backed securities. On several occasions I shared the podium with my consultant colleague Stephen Roulac and economist Art Laffer, father of supply-side economics, the keystone to what became known as “Reaganomics” (see photo below). 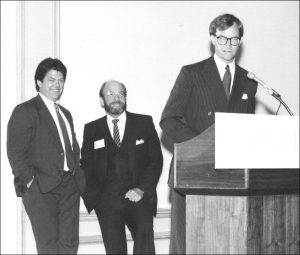 I have since seen the fallacies of supply-side economics – the belief that cutting tax rates will yield greater investment which leads to greater tax revenues. This belief assumes that people who save on their taxes invest the savings, creating jobs, and then willingly

pay taxes on their increased earnings. The result supposedly is more jobs so more employed people paying more taxes. This is also been called “trickle-down economics” and the underlying assumptions have gone largely unchallenged by the die-hard believers.

While President Trump has recently grabbed the headlines with his surprising actions withdrawing the U.S. from the Paris global climate change pact, he is also reviving the Laffer/Reagan approach in his tax cutting plans (see Wall Street Journal article, April 25, 2017). As the article points out, Harvard economist N. Gregory Mankiw, chairman of the President’s Council of Economic Advisers under George W. Bush, said “tax cut supporters exaggerate the possible growth benefits …a reasonable rule of thumb, in my judgment, is that about one-third of the cost of tax cuts is recouped via faster economic growth.”

So where does the remaining two-thirds of the lost revenue come from? It adds to the deficit and leads to tax increases down the road to pay the nation’s bills. It ends up being a short-term benefit for a few people at the expense of everyone else.

Needless to say, although I found Laffer quite affable and a pleasant fellow back in those days of naiveté, I am not a fan of his economic philosophy – espousing that tax rate cuts for the wealthy will ultimately generate more tax revenue. I am a fan of the idea that we live in an incredible country and taxes are our dues, a way of paying our fair share for all the benefits we enjoy as citizens of this country. Fair share means everyone paying for the privilege of living here; paying in proportion to what they make or the wealth they acquire.

For me, this has been part of my own personal “great growing up” – becoming a more mature human being, focused on the well-being of the whole rather than simply looking out for myself or my constituents.

Misdirection: A Key Tool for Magicians and the Negative Ego

Going Backwards: Resorting to Tribalism at the Worst Possible Time
Scroll to top