Blog
You are here: Home / Blog / Featured / At the Precipice We Change…or Do We? 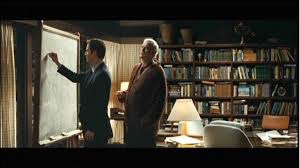 My best friend in high school, Larry Conley, and I were big fans of science fiction movies. One of the most memorable was “The Day the Earth Stood Still,” a black-and-white film which was remade in 2008 starring Keanu Reeves, Jennifer Connelly, Kathy Bates, John Cleese with more advanced special effects.

Scene from the 2008 movie: Keanu Reeves with John Cleese

In the film a space ship lands in Washington and an alien messenger named “Klaatu” – played by Reeves – assumes a human body and meets up with a Nobel Laureate – a “Professor Barnhardt” – played by Cleese. Klaatu warns the professor that barring a major reversal in our behavior we will be eliminated. The professor pleads, “You must have some technology that could solve our problem.” Klaatu responds, “Your problem is not technology. The problem is you. You lack the will to change….I cannot change your nature. You treat the world as you treat each other.”

In the 1951 film the aliens’ concern was the reckless development of nuclear weapons. In the 2008 version the issue was expanded to include the reckless path we are on toward extinction. Cleese argues to Reeves, “But every civilization reaches a crisis point eventually.” Reeves replies, “Most of them don’t make it.”

Cleese says, “Yours did. How?” Reeves explains, “Our sun was dying. We had to evolve in order to survive.”

The professor points out, “So it was only when your world was threatened with destruction that you became what you are now.” The alien agrees, then adds, “This planet is dying. The human race is killing it.” He explains that he and his civilization are here to save the Earth. “We can’t risk the survival of this planet for the sake of one species…There are only a handful of planets in the cosmos that are capable of supporting complex life…this one can’t be allowed to perish.”

Pointing to the similarity of the alien civilization’s history and our own situation here on Earth, the professor says to the visiting alien, “You say we’re on the brink of destruction and you’re right. But it’s only on the brink that people find the will to change. Only at the precipice do we evolve….” He then pleads for the alien to help us, not to destroy us, and not give up on us.

Needless to say the Earth is not destroyed in the end but you’ll have to watch the movie to see what happens and why.

My point in writing this now is to ask these questions: How close to the precipice must we get before we change? How close to irreversibility are we willing to take ourselves? People have been warning us for decades about the limits to growth, climate change, and the growing gap between the haves and have nots – all of which are unsustainable conditions getting worse instead of better.

All of our crises have a common cause, a common denominator. They all exist because of a lack of conscious leadership. Our existing leaders lack the consciousness, the courage and the system know-how and don’t seem to be willing to either learn about these things or step down. I believe that there are individuals among us that have the consciousness, courage and system know-how to lead us. Unfortunately, they have not, as yet, stepped into the mantel of leadership.

There is a time limit. We need to stop acting as if we have a lot of time. If current our leaders are inadequate, and I assert they are, then they need to be replaced by people who are up to the task. These conscious leaders will do what needs to be done to reverse the trends and make sure our home can support human life and that we aren’t regressing to a new Stone Age.

Learning to Live as a Liminal Cell
Scroll to top