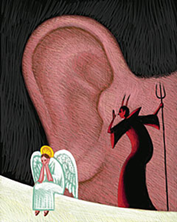 It is so much easier to see how we humans fool ourselves by observing others than it is to recognize it in ourselves. I can see how some of my friends can really believe their rationality, their reasoning for things needing to be the way they are, far more easily than I can see my own denial of some element of my unconsciousness.

When coaching clients, of course, it is my job to blow the whistle whenever my “BS detector” goes off and challenge what they are telling me in all earnestness. I have their permission to ask “is that really true?” if my “detector” continues to send out the alarm, to keep on asking it.

At a recent four-day retreat, a group of us were asked to write our commitment for the next year. I spent considerable time composing mine and finally determined it was accurate and a major stretch. After all, we wanted what was being called “10X Commitments” – not little wimpy ones but ten times more audacious than anything we might normally commit to. During a ritual where everyone was reading their commitment out loud I realized that what I had written was indeed wimpy and far from the way I wanted to show up in the world during the next 12 months.

For the day prior, I was fully convinced that my carefully crafted commitment statement was a stretch, was a true reflection of what I was committing to. However, after hearing almost half the people share their commitments I started to realize that I had been conned. My stated commitment was insufficient and inadequate for what I was wanting – a much fuller and more powerful expression of who I am. My “inner con man” had convinced me that a watered down statement would suffice.

In the context of The Great Growing Up, I discovered yet another part of myself that has not fully matured, that remains adolescent and cagey enough to con me into believing anything. My inner con man has yet to accept responsibility for all the power, light and imagination that God gave me, and keeps me playing smaller than I could be. When it was my turn I stood in front of everyone and tore up my previously written commitment and announced my realization.

So I warn everyone to watch out for that inner con artist that lies within us all, that egoic part of ourselves that argues for our inadequacies, our shortcomings and our limitations. It is this part of our negative egos that convinces us to remain small, separate and mediocre. As Marianne Williamson once wrote: “Our deepest fear is not that we are inadequate. Our deepest fear is that we are powerful beyond measure. It is our Light, not our Darkness, that most frightens us.”

Rebooting Ourselves to Achieve Full-Functioning

The Power of Pause
Scroll to top