Blog
You are here: Home / Blog / Featured / Who Needs a President When It Comes to Leadership?

There is an old fable that I have been reminded of these past couple of years centered around a Chinese farmer. Here’s part of a version told by British philosopher Alan Watts (1915-1973), considered by many to be one of the godfathers of the human potential movement:

Once upon a time there was a Chinese farmer, whose horse ran away.   And all the neighbors came around to commiserate that evening, “So sorry to hear your horse has ran away. That’s too bad.” And he said, “Maybe.” 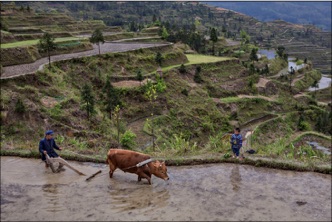 The next day the horse came back, bringing seven wild horses with it, and everybody came around in the evening and said, “Oh, isn’t that lucky. What a great turn of events. You’ve now got eight horses.” And he said, “Maybe.”

The next day his son tried to break one of these horses and ride it and was thrown and broke his leg. And they all said, “Oh, dear that’s too bad.” And he said, “Maybe.”

The following day the conscription officers came around to recruit to force people into the army and they rejected his son, because he had a broken leg. And all the people came around and said, “Isn’t that great.” And he said, “Maybe.”

And so it goes. The idea is that we never really know whether something is fortune or misfortune. This includes the election of Donald Trump as the 45th President of the United States.

In June, when President Trump announced that the U.S. would not honor its commitment to the Paris Accord on climate change, many of us sustainability-conscious people were shocked – some even horrified.

Recently I read in Fortune that even if the U.S. did withdraw the rest of the world still supports the Accord. Specifically:

…. sustainable investing is not something localized to America but rather a global phenomenon – minimizing the impact of policy changes at the White House. Take the example of the Paris Agreement: Even if the U.S. withdraws from that climate pact, the rest of the world remains on board, and thus pulls corporate practices and investor assets in that direction.*

Then my copy of Corporate Responsibility (CR) magazine arrived and I discovered that the U.S. business community is reshaping politics and leadership in Washington. In a CR article by Jan Lee I learned how people marshalled their own response to the President’s message resulting in thousands of businesses, schools, counties, cities and non-profits stepping up to tell the President that whether or not our government plans to represent U.S. citizens a social/commercial sector presently representing $6.2 trillion would continue to support the Paris Agreement.

The “We Are Still In” initiative was formed June 5th and its declaration has since been signed by more than 127 million Americans according to its website.

Scrolling through the list of supporters of this initiative one cannot help but feel inspired by the huge outpouring of commitment, certainly with many lesser-known entities but also many well-known institutions – corporations, foundations, universities, major cities and states.

I’m reminded of Barrack Obama’s 2008 presidential campaign, constantly reminding voters that he needed them to bring about the changes that he was committed to. But, in my view, we let him down. We did what we have done historically after electing a president – we vote and think we’re done; now we simply watch and critique. The “We Are Still In” initiative seems to be a shining example of the people responding responsibly even in the face of our leader abandoning a cause so many have worked so hard to bring about.

I have been around long enough to observe corporate responsibility evolve from a noble idea in the 1960s to an actual reality in 2017. And it feels great!

Navigating the States of Consciousness