A large part of what I write in The Great Growing Up is about bringing forth a new paradigm in how we think – a new worldview – that absorbs and integrates the old ways of thinking, keeping the parts that work in the next context and discarding those elements that have become outmoded. My definition of a paradigm is a mindset or story we tell ourselves that explains why things are the way they are. It is sort of self-validating worldview that gains widespread legitimacy until it is superseded by a better explanation. Often depicted as a sigmoid curve, it represents a cycle we find in nature and our social systems. Here is the graphic that appeared in The Great Growing Up: 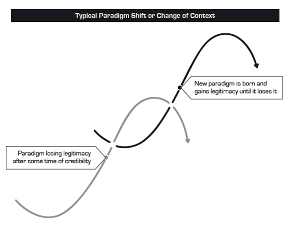 Illustration from The Great Growing Up

At FutureShapers, in our Roundtable Host certification programs as well as the curriculum for the Roundtables themselves, we give examples of some paradigm shifts that have occurred throughout human history. We find that the concept of a paradigm change is easier to embody with a variety of examples. So here are some examples I like to use:

Some large scale social paradigm changes took thousands of years to occur, like the flat-to-spherical Earth paradigm change. The ancient Greeks proposed that the Earth was a sphere in the 6th Century BC but it didn’t start gaining global acceptance until Columbus and other explorers returned from their 15th and 16th Century travels, proving that our planet was not flat as had been widely believed. They hadn’t fallen off the edge of the world as had been believed for ages.

Similarly, for 18 centuries it was commonly held that disease was spread by bad smells or “foul air.” In 1876 it was finally proven that disease was caused by bacterium, not bad odors, thus bringing a definitive end to Miasma Theory. Likewise again, it took a couple of centuries for Copernicus’ heliocentric theory, that the sun was actually the center of our known universe, to finally put to rest early Church doctrine that the Earth was at its center.

Fast forward to more recent times, the collapse of the Soviet Union and the fall of the Berlin Wall seemingly took place overnight, after a Cold War that lasted 45 years. Obviously there were many factors that contributed to the shift but, for the average citizen of the world, it seemed quite sudden.

As these examples demonstrate, paradigms can change rapidly, like with the worldview that kept the Berlin Wall in place – like an earthquake – or they can change over many, many generations – more like a glacier. Could it be that the longer a worldview has legitimacy and has been widely accepted – the more culturally engrained it is – the slower it may take to change?

This possibility caught my attention. I’ve noticed a relationship in some cases between the length of time a paradigm had legitimacy in explaining why things were the way they were – flat Earth, miasma theory or Cold War – and the time it takes for a new “explanation” or a new story to become widely accepted. If such relationship exists, then it might be worth looking at how long the existing worldview has been dominant.

HOW DID WE GET HERE?

So how did we get here? Let’s look at a few aspects of the old and emerging worldviews that might provide some perspective.

When did we begin to accept that we are separate from one another, that we can dominate nature, that the essentials for living are scarce, that for me to win you have to lose (or vice versa), that there are no limits to growth, that corporatocracy is okay, that special interests trump civil society, that…well you get the idea! The existing paradigm emerged around the time of the Industrial Revolution and has been dominant for nearly three centuries. Does this mean it will take three more centuries for humanity to evolve into a more functional, sustainable worldview? One hopes this timescale won’t perpetuate itself and that we won’t have to wait another several hundred years for political and popular will to gain traction and nudge us over the line, thus heralding new legitimacies for generations to come.

Separateness: Our widespread acceptance that we are separate probably had its origins in evolution, dating back to when people began to organize themselves into tribes, which eventually led to the forming of nations. We developed (and still do) a sense of separateness when we saw those outside our tribe (the “other”) as the opponent and therefore easier to demonize and kill. Various faith traditions have claimed for eons that all human beings, perhaps even all living things, are connected; now science is providing evidence to support this, further rendering outmoded and invalid the old assumptions of separateness.

Dominance over nature: A far cry from the pre-Industrial Age days of picks and shovels and manual labor, the industrial era brought with it the tools and technologies that would have a far greater and more rapid impact on our natural environment. This of course appealed to humankind’s hubristic attitude of “if we can do it then we must.” And we’re still doing it – exploiting nature, be it through deforestation or extraction of oil and minerals, and leaving a trail of pollution and destruction in our wake. The prospect of change in our present practices, and indeed our worldview, will remain uncertain – at least while competing attitudes prevail.

Scarcity: The scarcity mindset may have had its beginnings centuries ago when wealth was viewed as land ownership, at a time when land was in limited supply. There was a finite amount of land. Today wealth is no longer based solely on land ownership so there are no longer finite amounts of wealth an individual can acquire. Today, much if not most wealth lies in stocks and equities, not land, thus dissolving and rendering irrelevant yesteryear’s basis for scarcity thinking.

Limits to growth: A hundred years ago it may have seemed like the Earth possessed an endless supply of resources. In more recent years we have learned there are limits and we are in danger of bringing about our own extinction if we do not change our attitude or mental models – our worldview. The assumption that there are no limits is flawed yet there remains unwillingness in certain sectors to accept this.

Corporatocracy: The present influence of “special interests” over democracy possibly had its beginnings in the mid to late 1800s when, through industry pressure, legislation favoring U.S. railroads was passed. In the one hundred or so years since, the population of special interest advocates has grown substantially. Many even draft the legislation they want to see passed as a “service” to the sponsoring legislator and his/her staff. Lobbyists in Washington now outnumber legislators by a ratio of thirty to one; at the state level they outnumber legislators by nearly six to one. Clearly, lobbying is the glue that keeps the corporatocracy in place. 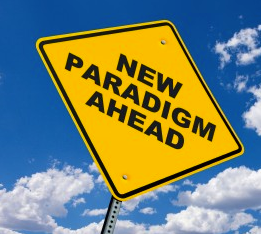 WHERE ARE WE HEADED?

The impetus for ushering in, or midwifing, this new paradigm has been around for over fifty years. To my knowledge it gained momentum in the 1960s alongside the human potential movement. In the late 1980s it seemed to peak as an academic topic. Here’s a link to a article I wrote for the World Business Academy in 1989 about old and new paradigms. In the 1990s it began to interest organizational design consultants and some progressive business leaders. Now, two decades later, we’re seeing a rising popularity of the conscious capitalism movement, along with a growing interest in mindfulness, wisdom and conscious leadership among some business leaders. . These more recent trends could be signaling a third or fourth generation of intentionality toward a new worldview, prompted by the growing crises in the global commons including but not limited to climate change.

I’m reminded of a saying coined by my colleague Tom Atlee, founder of the Co-Intelligence Institute. He says, “I’ve come to believe that things are getting better and better and worse and worse, faster and faster, simultaneously.” This sums it up pretty well, and certainly makes for interesting times.

Systems Being: Going Beyond the Theory of Systems Thinking

Flashback to an Adolescent’s Dream: A Personal Reflection
Scroll to top