Blog
You are here: Home / Blog / Featured / What We Want…Really?

For all the talk about world peace and serenity, ending poverty and global warming, the reality we live in seems to remain pretty much unchanged. Do you ever wonder why this is?

We have gone to the moon, invented incredible technologies, can appear holographically halfway around the world, but we seem unable to create a reality here on Earth where we are happy, conflict free and at peace. Hmmm? 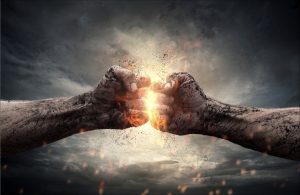 Let’s consider an outlandish idea, shall we? Let’s consider that all our talk about peace on Earth, goodwill to men, ending hunger and unconditional love is utter bullshit.

Let’s consider that we are engaged in one huge conspiracy – lying to ourselves and one another. Saying one thing but doing another.

World famous motivation psychologist Abraham Maslow has a section in the Preface of his book Motivation and Personality where he shares his “Grumble Theory” theorizing that it is human nature to be discontent. Since most people don’t read Prefaces, his Grumble Theory is not nearly as well-known as his Hierarchy of Needs.

What We Do versus What We say

We live in this dualistic reality where “otherness” prevails, making it very easy to take sides, feeling like you are right against all those who are wrong, wallowing in complaining about this and that while enjoying lifestyles that negatively impact the world. And, if you listen to the nondual sages, we made up this reality so we can enjoy all this drama, this “amusement park” that continues to entertain, distract and titillate our egos.

What’s my evidence for this outlandish idea?

The evidence is right in front of us. We not only tolerate all this high drama but eagerly participate in it. We have been doing it for centuries. We love it and it has become our lifestyle. And we don’t want it to stop. If we didn’t have anything to complain about we’d be lost. Imagine politicians doing their jobs, celebrities being great role models for our children, global solidarity on issues affecting the commons (water, soil and air), and crime being a minor issue for us. Imagine governments resolving conflicts through conversation, resolving issues at the table not the battlefield.

We love our heroes. But we also love our villains. What’s that you say? We love our villains? I don’t mean we love them like admire, respect and hold them up as role models, like we do our heroes. I mean we love them because they provide so much content for our daily living. If it weren’t for the “bad guys” we wouldn’t have anything to gossip about, to complain about or to get upset over. Are you saying we love to get upset? Yes, I am saying just that!

After all, a reality where everything is peaceful and people are simply enjoying themselves, where everyone has their basic needs taken care of, and life is like one big meditation could be very boring!

Could this be why we forgot that we are all one and created this dream state that seems so real (as dreams do when you are asleep) until one wakes up. Upon waking, the dream seems just as unreal as this dualistic reality does to the awakened individual.

We even created a media industry that keep us supplied with things that we eat up like candy, things that fill our appetites for conflict, violence, and mayhem of all kinds. Given that we all consume media, we then have an endless supply of subjects for gossip and social conversation. The latest natural disaster, celebrity trial, act of terrorism, political shenanigans, and scandals of all sorts serve as our headlines.

As we consume all this news, we not only add content to gossip or talk about with friends but we also give ourselves reasons for getting upset about whatever upsets us. And then we wonder why we have a mental health crisis; having a continuous diet of negative news can be as unhealthy for our psyche as having a continuous diet of pizza and soda pop is unhealthy for our bodies.

How did this happen? When we came into the world we did not have this dualistic perspective. We felt connected and a part of the whole, like the oneness sages talk about.

But in our early years our ego sought identity, a distinct self. The “negative ego” is where this idea begins, not content with simply being a cell among other cells but asserting an individual personality, a separate self. Now there’s you over there and me over here. We are separate, not the same. I exist separately from you.

It might be helpful for me to share a very succinct definition of what I mean by negative ego, the darker side of ego. I found it in a book called Beyond Ego by psychologist and educator Art Horn who defines this expression of ego as “the part of you that sees yourself as above, below or against other people or circumstances.”

Another perspective: John Greven is an advaita/non-duality sage who writes:

There is a saying that the mind makes an excellent servant but a poor master. At this point, the mind has seemingly become the master. It has a base idea of the world, what it likes and dislikes, and is devoted to the task of becoming more and getting more, while avoiding what it does not like. It calls itself “I”, psychology calls it ego.

After thinking we are separate we then forget the oneness. We come to believe that this separate dualistic reality is what’s real and have forgotten about the oneness. We might have brief tastes of the oneness from time to time, when we hear beautiful music, watch a spectacular sunset, have fabulous sex or some other awe-inspiring experience. We might even have a fleeting memory of our childhood days when this was our normal reality.

In an essay on oneness from The Chopra Center:

As a result of forgetting, we create an illusory world of duality, which leads to suffering. All disagreements, conflict, and wars are due to the mistaken belief that we are separate. When we realize we are one, who, or what is there to fight against? On a cosmic level, two people fighting is as ridiculous as if your hands decided they didn’t like each other and started fighting.

Suffering is what happens when we feel separate but, having forgotten we are all one, we don’t realize we bring on our own suffering. British nondualist and transpersonal researcher Steve Taylor writes:

Our strong ego creates a sense of duality and separation. It gives us the illusion that we are each an isolated entity, alone inside our body with our own thoughts and feelings, disconnected from the world ‘out there’ and the people and animals and plants that make up the world. The boundaries of our ego are fixed and firm, ‘walling us off’ from the world around us…

This dualistic state is not unlike sleeping, where the dream reality seems so real when one is in the dream. Upon awakening the dream can seem silly or surreal.

I’m reminded of something I saw several years ago on television. A World Wildlife Fund reporter was interviewing a Sudanese farmer about an unwanted local political situation where he was attempting to influence his village leaders. The farmer responded, “It is very difficult to wake up someone who is pretending to be asleep.”

Are most of us pretending to be asleep, indulging in a mass illusion, playing our part in a soap opera filled with suspense and high melodrama?

The more I learn about the kinds of conversations people are having, the more I hear what is occupying people’s awareness these days, the more I see the angst people are putting themselves through, and the more I wonder if many of us are pretending to be asleep.

Human Adulthood and The Great Growing Up